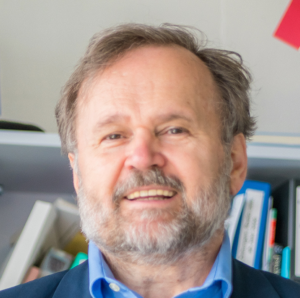 Willibald Ruch is a Full Professor of Psychology at the University of Zürich, Switzerland where he chairs the section of personality and assessment. He received his PhD from the University of Graz, Austria in 1980 and later worked at different universities in Germany, the UK and Switzerland. Beginning with his doctoral thesis he has a history of working on positive phenomena. One longstanding research interest is the study of humor, state and trait cheerfulness, and laughter. Together with his team in Zurich he researches the effectiveness of humor training programs and clown interventions, the ability to laugh at oneself, the fear of being laughed at (i.e., gelotophobia), and bringing gelotophobe-savy laughter to avatars. He developed several humor assessment instruments and humor from the perspective of Positive Psychology.

Currently he is working on character strengths and virtues in adults and children/adolescents and their role in contributing to the good life. Strength-based positive interventions and the study of signature strength in the role of fulfilment are further topics. He taught various courses on personality and assessment at different universities (e.g. Düsseldorf, Berlin, Frankfurt, Belfast, Zürich) as well as on positive psychology and humor and laughter. Willibald has authored more than 300 journal articles and book chapters and co-edited and co-written five books. Willibald is co-editing or on the editorial board of several journals (including Journal of Positive Psychology, Journal of Individual Differences, Journal of Research in Personality, Personality and Individual Differences), and co-editor of two book series. Together with coeditors he is now preparing a “Handbook of Positive Psychology Assessment.” Willibald is a founder member of the International Positive Psychology Association (IPPA) and the founder and president the Swiss Positive Psychology Association (www.swippa.ch), IPPA Fellow and senior scientist at the VIA Institute of character. At the University of Zurich he offers a post-graduate course on positive psychology. His section hosts a website for the self-assessment of positive psychology traits as well as character training. He founded the annual International Summer School on humor and laughter which is now in its 20th year. He is board member of “Science without Borders” (USERN).