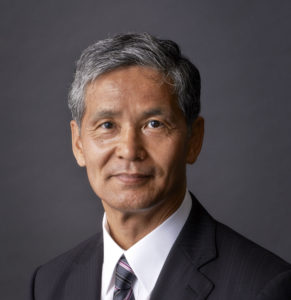 Speech title:
Evolution of human mind viewed from the study of chimpanzees

Tetsuro Matsuzawa is Distinguished Professor at the Institute of Advanced Study of Kyoto University, Japan. He is also the professor of the Primate Research Institute (PRI) of Kyoto University and General Director of the Japan Monkey Centre. He is the Editor-in-Chief of PRIMATES, the oldest English journal in Primatology. He is the immediate past president of International Primatological Society. He was a vice president of International Congress of Psychology 2016 held in Yokohama as the chair of the scientific committee.

His main research interests include chimpanzee intelligence both in the laboratory and in the wild. The laboratory work is known as the “Ai-project” and it has been conducted since 1976 at PRI. His research partner is a female chimpanzee named “Ai”. She gave the birth to her son named “Ayumu” in 2000.  Matsuzawa invented the Participation observation in which the researcher gets into the daily life of the chimpanzees without separating the infants from their mothers. Based on the triadic relationship of researcher-mother-infant, the researchers test the infants in the assistance of their mothers. Matsuzawa has been promoting animal welfare of the captive chimpanzees who are living in a social group that is kept in an enriched environment.  In his pioneering parallel effort of laboratory work and fieldwork, Matsuzawa has also been studying wild chimpanzees at Bossou-Nimba, Guinea, West Africa, since 1986. In the 3 decades fieldwork, he showed the cultural tradition of various kinds of tool use. Bossou chimpanzees use a pair of stones as hammer and anvil to crack open oil-palm nuts. Matsuzawa tries to synthesize the field and the lab work to understand the nature of chimpanzees.

With his colleagues, Matsuzawa started the discipline called Comparative Cognitive Science. He published journal papers and books such as “Primate origins of human cognition and behavior”, “Cognitive development in chimpanzees”, “The chimpanzees of Bossou and Nimba” from Springer. Tetsuro Matsuzawa is the recipient of the Prince Chichibu Memorial Award for Science (1991), the Jane Goodall Award (2001), the Medal with Purple Ribbon (2004), and the Person of Cultural Merit award (2013)