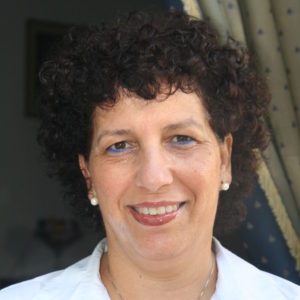 Talia has a MSW in clinical social work from Bar Ilan University, a degree in Integrative psychotherapy and a BSW in Social Work from the Hebrew University.

In 1973, During the Yom Kippur War, Talia served as an officer in the IDF, working with bereaved families and wounded soldiers. Talia also served as a supervisor for social workers and worked in a special unit of the Israeli National Insurance Institute for the Treatment and Rehabilitation of Widows and Widowers.

Since 2001, Talia Levanon has directed the Israel Trauma Coalition (ITC), a collaborative network of over forty organizations committed to a proactive role in policy making and the provision of a systematic continuum of trauma related care and preparedness. As Executive Director, Talia is responsible for the development and establishment of innovative models such as ten resilience centers and regional training centers, leading the partnership with the Government and Home Front Command.

With over 30 years’ experience in the field of trauma care and bereavement, Talia is actively involved in several national and international projects committed to developing emergency preparedness and community resilience. Models, protocols and interventions developed by the ITC have been implemented in Haiti, U.S.A, Japan, Mumbai, France, Ukraine and the Philippines. Talia represented Israel at the United Nations in a forum on victims of terror, works with WHO, UNICEF, CDC and EUTOPA on several post disaster and preparedness projects and is a frequent keynote speaker at international forums.

Talia was born in Switzerland and raised in Nigeria. She and her husband Erez live in Jerusalem and take great joy in their four daughters and six grandchildren. In addition to her work, Talia enjoys entertaining, travel, and opera. She is fluent in English, French and Hebrew.