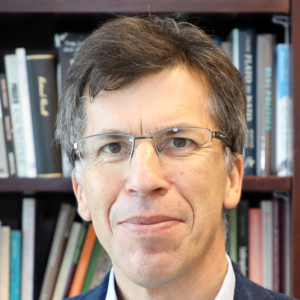 He is the author of Whose Liberty is it Anyway? Europe at the Crossroads (Seagull, 2012) and Liberal Nationalism in Central Europe (Routledge, 2004, pbk 2006), which was awarded the prize for Best Book in European Studies (2005) by the University Association for Contemporary European Studies (UACES). He has published in leading politics journals, including Government and Opposition, International Affairs, The Journal of Common Market Studies and West European Politics; high impact sociology journals, such as Telos and Thesis Eleven, and area studies journals, such as Europe-Asia Studies and Osteuropa.

His research interests include political philosophy, spanning thinkers as diverse as Carl Schmitt, Hannah Arendt, Václav Havel and Slavoj Žižek; the comparative study of nationalism and the various aspects of the crisis of the European project, including European Union’s relationship with Russia and China. Dr Auer is an innovative teacher, having created one of the first iTunes U courses about ‘EU in the New Millenium’ in 2012 and is about to deliver a Massive Open Online Course ‘Europe without Borders?’ He also writes occasional opinion pieces for The South China Morning Post, The Australian newspaper and comments on European politics in the media, such as ABC News 24 (based in Melbourne), CNBC and RTHK (based in Hong Kong).