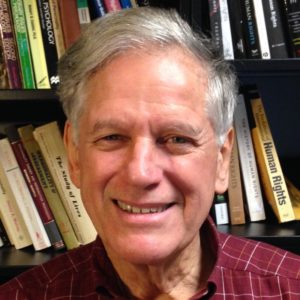 A native of Tennessee in the U.S., Sam McFarland received his Ph.D. in social and personality psychology at Vanderbilt University in 1971. He then joined the psychology faculty at Western Kentucky University (WKU), where he taught through 2013. Now Professor Emeritus, he remains active in research and writing.  He is the author of about 90 articles and book chapters, and coauthor of one book.

His early research focused on prejudice and ethnocentrism. In 1989, while a Fulbright Senior Scholar in the Soviet Union, he and Russian colleagues conducted the first studies of the authoritarian personality in Russia. In the 1990s, he served as Director of WKU’s University Honors Program and developed an honors course on human rights, which he taught through 2013.

In the early 2000s, his research shifted to the psychology of support for human rights. In that pursuit, he, along with student-colleagues Matthew Webb and Derek Brown, developed the Identification with All Humanity Scale, a measure of Gandhi’s dictum that “All humanity is one undivided and indivisible family.” His and colleagues’ 2019 review of all psychological research reflecting Gandhi’s dictum is in Advances in Political Psychology.

Dr. McFarland has long been a member of the International Society of Political Psychology. He has served the Society in many capacities, including as its President in 2009-2010.

Now in his ninth decade, Dr. McFarland is completing a book with short biographies of twenty-five men and women who made major contributions to advancing human rights. These include persons such as Granville Sharp, who launched the campaign against the African slave trade in the 1760’s, Henry Dunant, who led in the creation of the First Geneva Convention on war crimes and the International Committee of the Red Cross in the 1860s, Raphael Lemkin, who coined the word “genocide” in 1944 and led in making genocide an international crime, and Eleanor Roosevelt, who chaired the UN Commission that created the Universal Declaration of Human Rights in 1948.

Dr. McFarland and his wife, Cheryl, have been married for 48 years. They have one grown son and two grandsons.