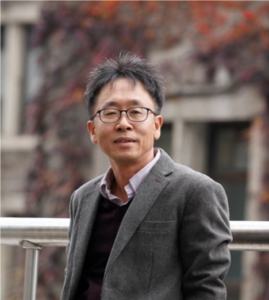 Eunkook M. Suh, professor of psychology at Yonsei University at Korea, is an internationally recognized scholar on the topic of happiness. He received his Ph. D. at the University of Illinois (Urbana-Champaign), studying with Drs. Ed Diener and Harry Triandis. Before coming to Yonsei, he served as a faculty member at the Department of Psychology and Social Behavior at University of California, Irvine. He has won research awards from the International Society of Quality of Life Studies and the University of Illinois, and teaching awards from Yonsei University and UC Irvine.

Professor Suh’s research focuses on how the experience and expression of happiness is shaped by multiple factors, ranging from self-views to cultural beliefs. More recently, he has extended his interest to evolutionary and ecological issues to understand “why” happiness is experienced and sought after by humans. Suh’s scientific work has received over 55,000 citations (Google Scholar, 2019), has co-edited a book (Diener & Suh, Culture and Subjective Well-Being), and translated several psychology bestsellers (e.g., Stumbling on Happiness) to Korean.

Suh reviews regularly for major scientific outlets (e.g., Psychological Review, Psychological Science, Journal of Personality and Social Psychology, Nature, American Psychologist), and has served on the editorial boards of 5 psychology journals. In Korea, he was the director of the Happiness Index Project (supported by Korean Psychological Association), and is a primary consultant for government programs launched for assessing Koreans’ happiness. Suh has also served as a committee member for international organizations, such as the Global Happiness Council (supported by the UAE government) and a workforce that submitted a happiness measurement proposal to the United Nations.

In addition to research, Eunkook Suh disseminates happiness knowledge to various audiences in the public sector. He has authored a Korean bestseller that recasts happiness from an evolutionary perspective, and offers consultations and lectures to CEOs of major Korean companies, such as Samsung and Hyundai.