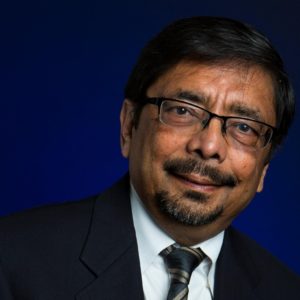 Dipak K. Gupta is a Professor Emeritus in the Department of Political Science at San Diego State University. Gupta was the Fred J. Hansen Professor of Peace Studies from the periods 1998-2001 and 2004-2011. He is also former Director and one of the founders of International Security and Conflict Resolution (ISCOR), an innovative multidisciplinary undergraduate program. ISCOR is one of the fastest growing majors on campus with over 300 declared majors. He is also a visiting Professor at University of San Diego.

Gupta has been a visiting professor at St. Antony's College, Oxford University, El Colegio de Mexico in Mexico City, Leiden University in the Netherlands, Fudan University in Shanghai, China and the Terrorism Prevention Branch at the United Nations Office for Drug Control and Crime Prevention (ODCCP) in Vienna, Austria. He was also awarded a summer fellowship in the International Studies Program at the Hoover Institution for War, Peace, and Revolution, at Stanford University. He received a post-doctoral fellowship at the Institute for International Politics and Economics in Belgrade, Yugoslavia.  In 2010 Gupta received a Fulbright (Expert) Fellowship at Bilgi University, Istanbul, Turkey.

Dipak Gupta is the author of ten academic books (one forthcoming) and has published over 150 articles in scholarly journals, research monographs, edited volumes and newspapers. He has also been invited by the Prime Minister’s office of Norway, the foreign ministries of Sweden, the Netherlands, the Interior Ministry of Turkey. He was among a select group of invitees of the Safe Democracy forum in Madrid, convened by the King of Spain in 2005. His works have been translated in many languages.

Gupta is also an award-winning artist, whose paintings are regularly on display in local galleries.

He has recently completed his first work of fiction about radicalization of a young man.