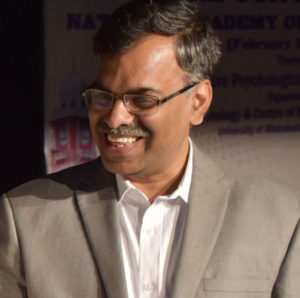 Dr. Narayanan Srinivasan is currently Professor at the Centre of Behavioural and Cognitive Sciences (CBCS), University of Allahabad. He headed the Centre from 2009 to 2018. Dr. Srinivasan has been a visiting scientist at the Riken Brain Science Institute and Visiting Professor at University of Rome. He has a Master degree in Electrical Engineering from Indian Institute of Science and PhD in Psychology from University of Georgia. He worked as a postdoctoral fellow at the University of Louisville. He also worked at the Nanyang Technological University in Singapore for two years before joining one of the first centres for Cognitive Science in India. He has been working at CBCS for more than fifteen years.